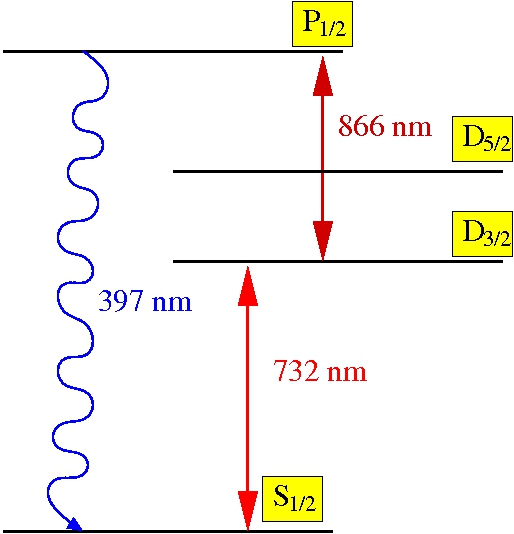 Cooling beyond the Doppler limit without resolving the motional side-bands

For calcium-like ions, an alternative cooling scheme using the same laser configuration than side-band cooling can be used with single ions or ion strings, but with no requirement of side-band resolution and no need for Lamb-Dicke regim. One of the motivation is to cool ions without using UV laser sources, like usual Doppler cooling do. The excitation scheme implies the quadrupolar transition and most photons are scattered on the UV transition, which results in a detection with no background. On the signal over noise ratio point of view, this compensates for the lower number of scattered photons than in the conventional cooling scheme. A major difference with side-band cooling is that the photon recoil from the two lasers are involved in the cooling. It was confirmed experimentally by comparing two configurations where the recoils add up or cancel (see here).

This work, both theoretical and experimental, involved the CIML group and the group of Michael Drewsen